According to legend, a hundred thousand Dakinis (angel-like beings) landed here 800 years ago and imprinted their imprints on the rock.

Bumdra Trek combines a moderate labelled hike around Paro with a guided tour of Paro and Thimphu. This is the shortest accessible trip in Bhutan, starting and finishing in Paro and taking you from the north to the north-west of the valley, terminating at the Taktsang Monastery, also known as the "Tiger's Nest," one of Bhutan's holiest sites. The first day of the journey requires a lot of climbing, but you will be rewarded with some beautiful views of the valley and the snow-capped mountains; the second day of the trek is much easier, with primarily descending. 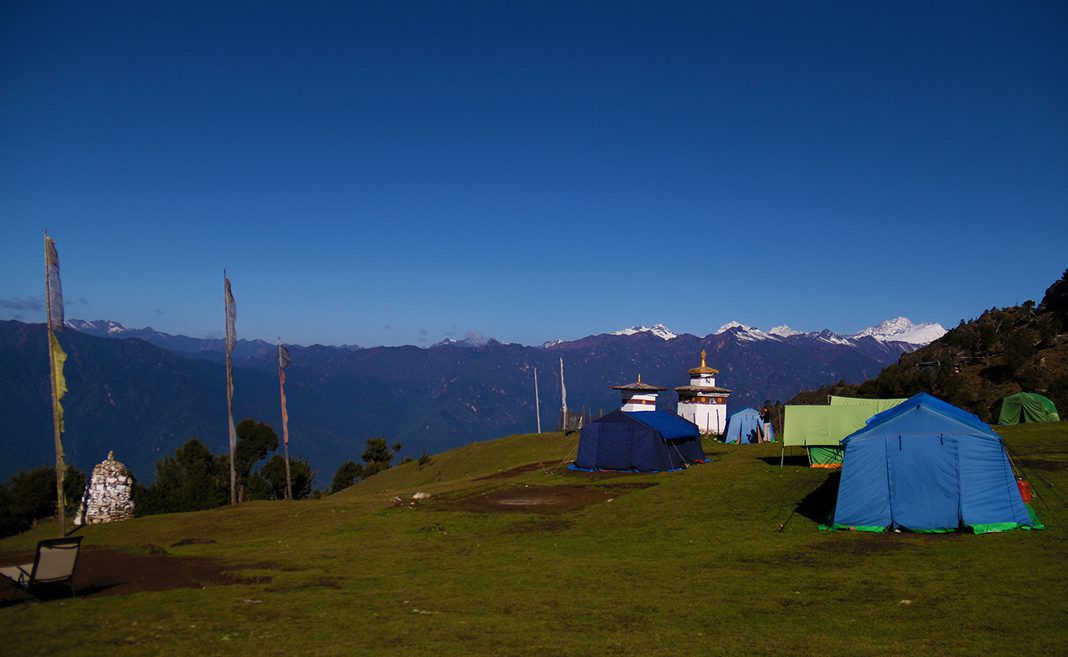 The journey begins with a flight to the beautiful green valley of Paro, where you will get a bird's eye view of the world's highest mountain range. The day begins with a colorful Paro city tour that includes stops at Ta Dzong and Paro Rinpung Dzong, followed by a drive to Thimphu. Allow one day in Thimphu for sightseeing before returning to Paro. The journey continues on the third day with an expedition ridge climbing around Bumdra, before concluding at the Taktsang Monastery ‘Tiger's Nest' and returning to Paro by car. Bumdra Trekking is a short trek inside the Dragon Kingdom, stopping at some of Bhutan's most famous sights and taking in some spectacular panoramic views of the Bhutanese scenery and snow-capped mountains.

Highlights of the Bumdra Trek, Bhutan

At an elevation of 3,895 meters above sea level, Trek Bumdra is one of Bhutan's greatest mountain locations. It's a location where visitors may enjoy both physical activity and spiritual growth while being surrounded by breathtaking scenery. 01.

Low-altitude treks are the best way to spend a winter in Bhutan from November to early March, when the climate is warmer and showers are more common than in the north. Low-altitude walks may be done at any time of year, except during the summer, when monsoon rains can make the trails muddy and hazardous.

Autumn is also a wonderful time to go hiking, but it only lasts from mid-October until the middle of December. Because there are few clouds in the sky and temperatures in the higher Himalayas are tolerable, this is the most popular period for trekking in Bhutan.

Although the spring season is not suitable for high-altitude trekking, it is suitable for low-altitude hikes in Bhutan's north-central and southern regions. From March through May, the weather is perfect for trekking along the meandering paths that weave their way through all of central Bhutan's hills and valleys, with temperatures that are cooler than in the summer.

The Bumdra hike is only about 11 kilometers from Paro's valley. You can continue on to the Bumdra Monastery, which is the highlight of the tour.

Despite its short duration, the journey is packed with exciting days that include excursions to a variety of tourist attractions. On each of these days, you will have the opportunity to visit various holy sites. The Rinpung Dzong, Kichu Lhakhang, Dobji Dzong, Tashichho Dzong, Sang Choekor Monastery, and Tiger's Nest Monastery will all be visited. These pilgrimage locations clearly represent the Buddhist religion.

From vistas such as Chele La pass at 3,988m, Haa Valley, Chhuzom, Bumdra, and Tiger's Nest Monastery, you will be treated to some of the best views of Mt. Jumolhari, lush slopes, and rapid rivers. This is the hike for you if you are a fan of Bhutanese culture and customs as well as natural beauty.

The following details is the itinerary for your 7 days Bumdra trek, Bhutan.

With magnificent views of sacred Mt. Chomolhari and Mt. Jichudrakey, take a flight to Paro. Upon arrival, you will be greeted and taken to Thimpu, Bhutan's capital, where you will check into a hotel. In the afternoon, we visit the Memorial Chorten, which was erected in remembrance of the late 3rd king, and then travel to Buddha's perspective, where we see the world's largest Buddha statue.

Changgangkha Lhakhang, Takin's small Zoo, Painting school, national library, folk heritage museum, textile museum, and handmade paper factory are some of the attractions to see in Thimphu in the morning. In the evening, we will visit TashichhoDzong, a stronghold that houses His Majesty the King's throne room as well as the summer residence of the central monk body.

Drive to Paro after breakfast. Check into your hotel when you arrive in Paro. We'll go to the National Museum in the afternoon. The monastic body is presently housed at the ParoDzong, a huge castle constructed in the 17th century.

Drive to Sang in the morning. It takes around 3 hours to hike up from the temple through the alpine wilderness to the base of the ancient temple. You can view Bumdra Monastery and a high broad meadow studded with holy chortens and prayer flags after ascending past ruins and fluttering prayer flags (cave of a thousand prayers).

We have views of golden temple roofs after 1-2 hours of descent. Before reaching the gardens of Zhangtopelri, the road twists around the slope, passing by monasteries and temples. Later, we arrive at the gates of Taktsang, with a view over the canyon, followed by a sharp plunge to a waterfall and a climb on stairs to the Tiger's Nest itself. Then it's back to the motel for a good night's sleep.

Visit Dzongdrakha's temples in the morning. Continue driving to Haa via the Chelela Pass, which has a height of 3988 meters. We can view Mt. Jomolhari, the country's holiest mountain, if the weather is clear.

Have breakfast and pack your things in the morning because our office representative will meet you at the hotel and transport you to the airport for your departing flight.